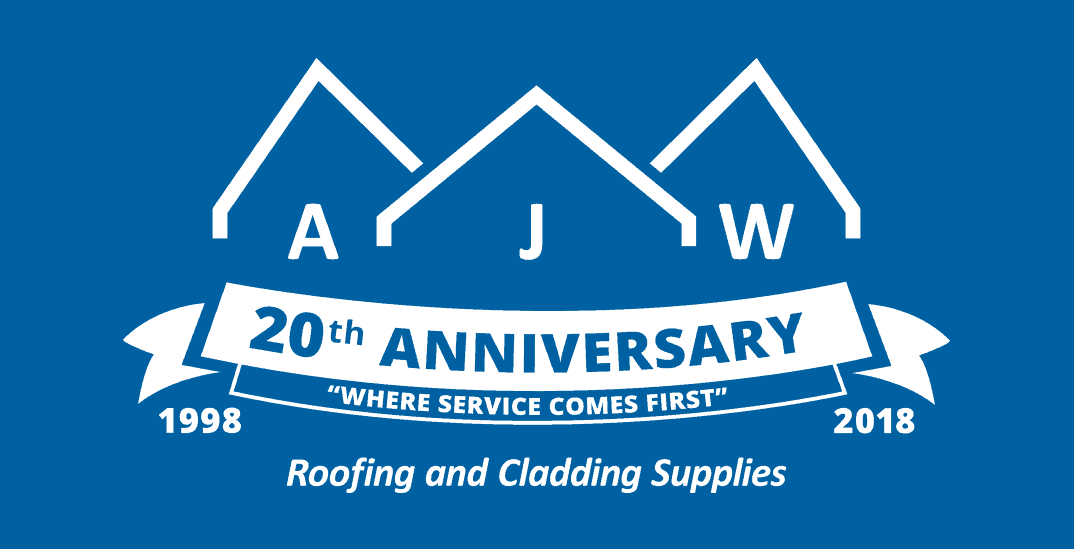 2018 is a year of celebration for the team at AJW Distribution as it is with great pride that they are celebrating its 20th year! Managing Director, Alan John Woods, set up AJW back in March 1998 and has seen the company develop from a ‘one man band’, to the ever-growing successful business that it is today. With nearly 60 staff in 4 depots throughout the region and a new office just opened in Leicester, AJW shows no signs of slowing down.

Mr Woods commented: “I never dreamt in my wildest dreams, 20 years ago, that AJW would be so successful and become such a force in the East Anglia roofing market.”
In fact, its continued success and growth over the last 20 years is largely thanks to Alan’s highly regarded reputation and respected opinion following a long serving career in the world of roofing.

Alan joined Atlas Cement (now Marley Eternit) in Meldreth straight from school. He has lived and breathed roofing for many years, amassing a knowledge of the industry that exceeds anyone and his skill to sell is extraordinary as Norman Morter from Briarwood agrees: “Alan is the best telephone sales person around!”

As a family-owned and run business, AJW prides itself on the service it offers to its customers and also celebrates the high quality of staff which they have.

Charlotte Woods, Marketing Director, and Alan’s daughter comments: “We have the best staff in the business in East Anglia, with such exceptional knowledge on all roofing areas. We are very lucky to have such a loyal and dedicated team who are so committed to helping the company develop and grow successfully’’.

Alan Woods continues: “Moving forward after 20 years, I feel it is time to step back and take even more holidays, so over coming weeks, my responsibilities will be delegated to my three children; Gareth, Charlotte and Thomas, plus our ever growing band of managers.

I would like to thank everybody for their support over the years. In my days at Atlas I employed a young semi-pro footballer called Ted Carolan, who followed me to our previous company and then 13 years ago, came to AJW. Without his help, friendship and support we would not be the force we are today. He has, without question, promoted the company’s motto of ‘Where Services Comes First’. All of our younger staff look up to Ted and constantly seek his advice. It is with great pleasure that we will be celebrating our 20th Anniversary with various events throughout the year. Watch out for offers, promotions, charity events and also depot parties to fully mark this huge achievement. Finally, I would like to wish the younger generation every success in the future.”

AJW Distribution Ltd is an independently owned company which supplies roofing, cladding and general building materials to a wide variety of contractors, builders, building merchants and also to the general public. With depots in Chatteris, Sawston (Cambridge), Norwich and Witham (Essex) along with a new office in Leicester, AJW Distribution has matured to become one of the region’s largest and most trusted distributors of roofing and cladding materials for the industrial, agricultural and domestic markets.

Fixing dry-fixed. An overview of the new BS 8612 dry-fixed ridge, hip and verge...