An award winning housing development in the historic village of Waddesdon, which has been devised and managed by the Rothschild Foundation, has used Marley’s Double Acme Camber tile to create a striking aesthetic that is reimagining rural living.

Made up of 75 homes, the residential project, which won ‘Best Conceptual Design’ at the 2019 Sustainable Architecture awards, has used over half a million of Marley’s Acme Double Camber tiles in Burnt Flame. With the tiles used not only on the roofs but also applied vertically, they were able to perfectly complement the project’s Scandinavian inspired design.

With the roofing element of construction starting in 2018, Marley’s technical team worked closely with the project’s architects, C.F Moller, to assist with CAD drawings to ensure a suitable build-up and ventilation of the roof.

Andrew White, Area Sales Manager at Marley, said: “C.F Moller was clear from the outset on the type of development it wanted to create. Turning away from traditional design, instead favouring an approach which reflected modern living, to deliver a stark contrast against the historic village setting.

“Seeking a crisp, clean look it was therefore important that the roofs of the homes also reflected this vision. Marley’s Acme Double Camber in Burnt Flame was the ideal choice. As it is suitable for vertical applications it was able to deliver a finish which meant the transition from roof to exterior wall was seamless. In addition, the tile was also able to interact with other exterior elements of the build including window reveals, cladding at the gables, and guttering, which was a significant challenge on the build.”

The Rothschild Foundation is a charity supporting arts and heritage, the environment, education and social welfare by awarding grants, fostering dialogue and debate, and through its support of Waddesdon Manor. 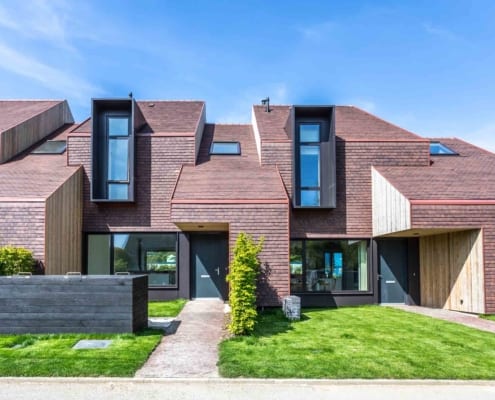 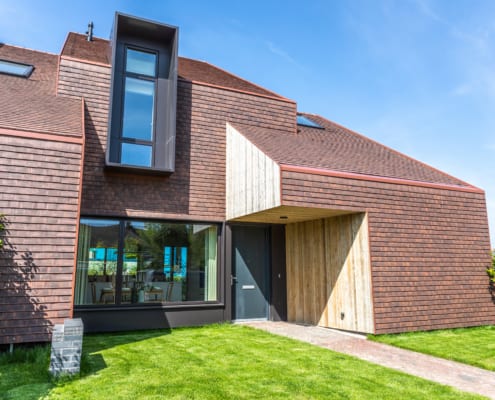